The farm Doornbosch has been in the van Heerden family for generations. On 28 April 1812, on his way from Graaff Reinet to the north, the famous explorer, William J Burchell, visited Doornbosch, then owned by Cootje van Heerden. In his Travels in the Interior of Southern Africa, Burchell worded his impression of the visit as follows:

… it was nine o’clock in the evening before we arrived at Cootje van Heerden’s where we had purposed to pass the night. This farm house was superior, in most respects, to all which I had hitherto seen in this quarter, and nearly equal to the best in the Cape District. It was built on a large scale, and in a more substantial manner, than the general class of colonial dwellings, and therefore it scarcely need be added, that the owner was in affluent circumstances. My fellow travellers, being the intimate friends of van Heerden, were received, and myself also, in the most hospitable manner. The appearance of the place and its inhabitants, was altogether as respectable as any I had seen in the colony.1

Burchell also refers to the so-called ‘Coudveld’ to the south of van Heerden’s farmstead:

Southward from this place, is a very elevated tract of land, called Coudveld (Coldland; or the Cold Country), which, seen from a distance, presents the form of a table-mountain. On the summit of this, there is a single farm-house; it was inhabited by a respectable Dutch widow, who among her neighbours, passed under the familiar name of Hannah Coudveld. This spot is considered by every Sneeuwberger, as undoubtedly the coldest place in the whole colony.2

If one goes according to current place names Hannah Coudveld would have lived on what is indicated as the Koueveldberge on the relevant 1:50 000 map sheet and which is situated between Toorberg and Meelberg. In the immediate vicinity of the Koueveldberge one also finds farm names such as Koueveld, Koudveldshoogte and Koudeveld on the relevant map sheet. According to a map provided in Burchell’s Travels in the Interior of Southern Africa the whole area from Soldaatkop in the north to Meelberg in the south is indicated as Koudeveld.

South of Doornbosch farmstead this includes Toorberg, the Koueveldberge and Meelberg, all three of them which have a table-mountain-form. Hannah’s homestead could therefore just as well have been situated on Toorberg or Meelberg. Whether Hannah lived on Toorberg, Meelberg or the Koueveldberge proper she must have been a formidable lady to live on such a cold and wind-swept mountain and she must have enjoyed a spectacular view from her homestead as well. 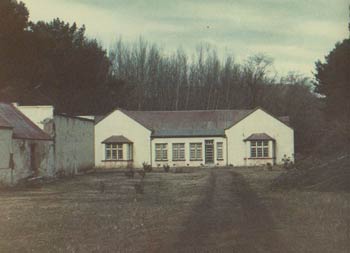