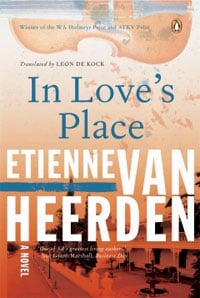 “The car’s sitting on his backside. The light bores into Christian’s rear-view
mirror, splashing onto his face. He puts his foot down, pushing the small BMW
to its limit, but the rat-car stays right there, on his bumper. Suddenly, with the
assurance of practice, the car swerves into the lane for oncoming traffic and
pulls into position next to Christian. He feels panic pounding in his chest.
The car pulls slightly ahead of the BMW, but doesn’t swerve into the space
in front of Christian as an overtaking car would. It keeps on racing ahead
in the wrong lane. On the back window, in letters that are ornamental and
provocative, he reads: Don’t fuck with me.

“The car pulls back next to Christian again so that the two vehicles ride next
to each other. The tinted window rolls down. In the passenger seat the young
man is wearing dark glasses and a red bandana around his forehead. From his
sleeveless top a lean and muscular upper arm emerges, on which a dragon,
tattooed across the bulge of the deltoid, rears up on hindlegs.

“Suddenly a revolver appears. Black, light blinking against it. The BMW’s
front windscreen shatters. Flecks of glass fly against his face, flowing past his
throat. Bright red crystals fanning out in the glow of brake lights. It’s as if he’s
just driven into a swarm of bees.”